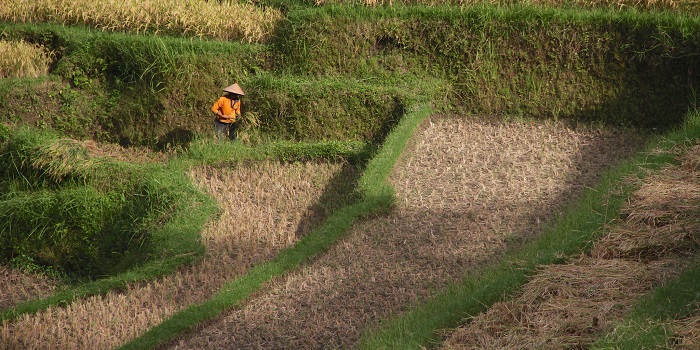 WHAT IS THE FUTURE OF SMALL FARMS IN ASIA?

The vast majority of farms in Asia are small-scale and are becoming smaller due to population growth and further subdivision. The average farm size halved in India between 1971 and 2006 and the number of farms less than 1 ha in Bangladesh increased from about 50 percent in 1976 to 90 percent in 2005 (Otsuka 2013). As farm sizes shrink, many throughout the region have begun to wonder whether small family farms are still a viable livelihood option.

A number of empirical studies have shown that small farms are more efficient and productive than large farms per area (Hazell 2015) and because small farms account for a large share of the rural poor, their development can encourage both growth and poverty reduction (Rosegrant and Hazell 2000). Supporting small farms has therefore been an important development strategy and was thus the foundation of the Green Revolution. However, farm sizes in many places are becoming too small to support agricultural livelihoods ushering households into more diversified employment composed of farm and non-farm jobs (Davis et al. 2010). In addition, labor costs are rising as urban opportunities grow and surplus labor is drawn off the farm. Thus, the price of land is decreasing relative to labor, making larger farms and agricultural mechanization a more efficient option. Still, in most developing countries the evidence of reverse farm-size transition where land consolidation begins and farm sizes increase is still limited (similar to that seen in Japan, Taiwan and South Korea after the Green Revolution).

To explore the viability of small farms in Asia, a recent article by Otsuka, Liu and Yamauchi examine trends in farm size, productivity, and wage rates in several Asian countries to better understand the farm size transition. Their theoretical model shows that in economies with high wage rates, the optimum size for farm operations grows and that in some locations in Asia, the farm size transition has already begun to take place, pointing to the Punjab region of India and the Mekong Delta of Vietnam, driven in part by strong growth in urban areas that offer job opportunities. They further hypothesize that in many locations, especially those with relatively well-functioning land markets, farm size is likely to begin expanding hand in hand with increased mechanization. Still, many countries have land markets that hinder farm consolidation locking small farmers in noncompetitive livelihoods.

The topic of farm size and transformation will be a key research topic for the ReSAKSS-Asia network in the next couple of years. Policy makers throughout the region have begun to ask question about how to continue to support small farms to maintain their viability in order to prevent large scale rural migration to urban areas that may not offer sufficient low-skill job opportunities. Others are grappling with how best to support the farm-size transition in an environment where wage rates have already increased, be this through improved land markets, better mechanization policies, or the provision of education, skills and assets for youth to succeed in a nonfarm economy. ReSAKSS-Asia will be drawing on the expertise of researchers in the region to provide evidence to help policy makers tackle these questions in order to develop suitable policies and strategies.