THE ROLE OF AGRICULTURE IN THE STRUCTURAL TRANSFORMATION OF INDONESIA

Indonesia has managed to combine high rates of growth, rapid reductions in rural poverty and a significant structural transformation of its economy all at the same time without a big increase in urban manufacturing. Agriculture was a critical part of this transformation through two important channels.First, export-oriented agriculture, particularly palm oil and rubber contributed to rising foreign exchange receipts and helped make compatible rapid growth without balance of payments pressure on the macro economy. 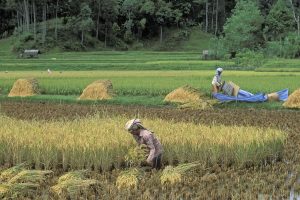 Second, through the release of workers from low productivity agriculture to more productive non-agricultural activities, structural change contributed between 25 and 50 percent of the rise in national labor productivity depending on the period. The government also played an important role in agricultural development and productivity growth. Public investments in irrigation in combination with subsidies for fertilizer and improved seeds increased agricultural productivity  generating an adequate supply of food for domestic needs with less labor.  More information about Indonesia's structural transformation and agriculture's role can be found here.