A one-day conference on Agriculture and Food Systems, Climate Change and Nutrition in CIS countries featuring the Global Nutrition Report 2015 was held at Lomonosov Moscow State University in Moscow on February 11. The conference brought together about 80 participants from universities, governments and international development agencies in the Central Asia region. The discussion highlighted the linkages between climate change, agriculture, food systems, social safety nets, and nutrition outcomes. 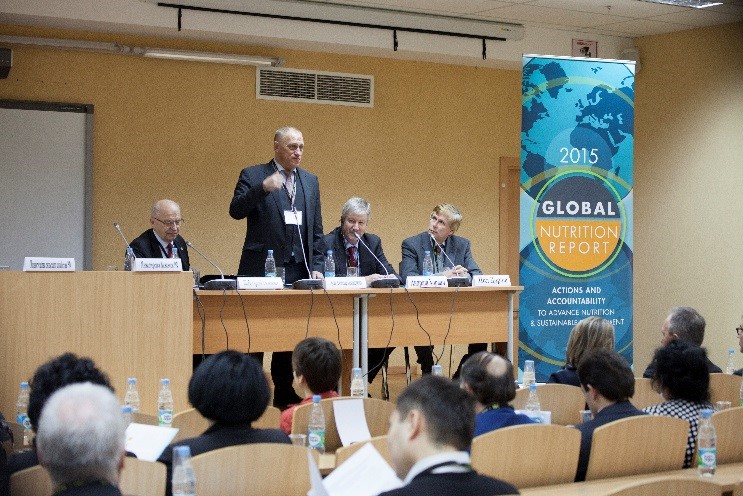 Prof. Sergey Alekseevich Shoba, Director of ECFS, opened the conference and welcomed all participants. Then Prof. Alexander Auzan, Dean of the Faculty of Economics at Lomonosov Moscow State University delivered an opening remark and addressed the importance of nutrition. He mentioned that nutrition is not just an issue faced by poor countries; a balanced diet is essential for everyone all over the world.

Mr. Andras Horvai, Country Director and Resident Representative for the Russian Federation, Europe and Central Asia from the World Bank, highlighted the World Bank’s vision for the food and agricultural sector in 2030. Aligned with the sustainable development goals, the vision is to have a global food system that feeds people with a nutritional and affordable diet and also generates jobs and incomes.

Dr. Paul Dorosh, Division Director of Development Strategy and Governance Division at IFPRI, presented the 2015 Global Nutrition Report (GNR) on behalf of Lawrence Haddad, IFPRI’s Senior Research Fellow and co-chair of GNR Independent Expert Group. The presentation showed progress on nutrition status in CIS countries. For example, Azerbaijan, Kyrgyzstan, Republic of Moldova, and Uzbekistan were on course to meet the Global Nutrition Targets for 2025 of reducing stunted children by 40 percent. Kazakhstan and Tajikistan made some progress, but remained off course to meet the global nutrition target on child stunting. The report calls for actions on combating malnutrition in all its forms. 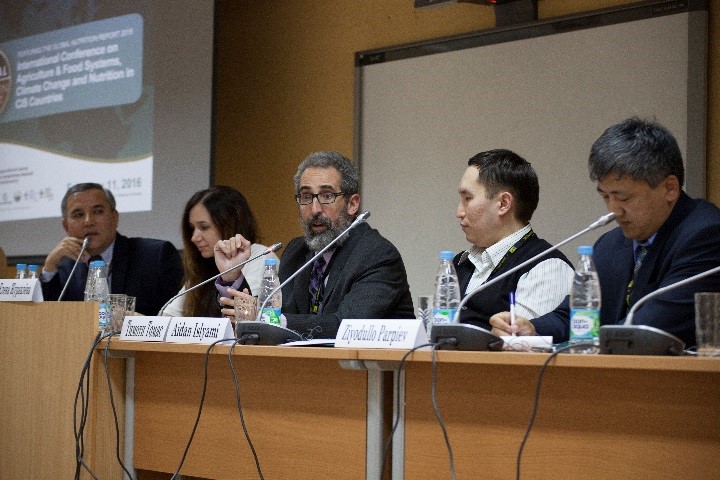 The conference focused on the impact of climate change on food systems and nutrition in Central Asia. IFPRI’s Research Fellow Dr. Timothy Thomas presented on climate impact on the production of cotton, barley, wheat, maize and potatoes, based on IFPRI’s IMPACT model. He showed that Central Asia is projected to experience greater climate shocks than most regions through temperature changes. This presents opportunities for gains in the winter and potential challenges for spring crops. In addition, Dr. Aidan Islyami from Kazakh-British Technical University, Dr. Ziyodullo Parpiev from Westminster International University, and Dr. Elena Zhuravleva from Krasnodar State University presented climate change impact and food security in Kazakhstan, Uzbekistan, and Armenia respectively.

The linkages between agriculture and nutrition were also discussed at the conference. Kamiljon Akramov, Research Fellow and Project Leader of IFPRI’s Central Asia Program presented his study on agricultural diversity, dietary diversity, and nutritional outcomes in Central Asia. The study results show that there is a strong association between household dietary diversity and agricultural diversity at the district level. Households in communities located further away from urban centers tend to have lower dietary diversity. He suggested that further promotion of agricultural diversity may be necessary by allocating more land to horticulture and feed crops, and investment in infrastructure is important to promote market integration across different regions of the country. Researchers from the region also presented their studies at the country level: Prof. Alka Parikh from Institute of Information and Communication Technology (DAIICT) presented food security index in Tajikistan; Dr. Alexander Saak from IFPRI showcased dairy value chain in Kyrgyzstan; and Kamila Mukhamedkhanova from Center for Economic Research/UNDP discussed Uzbekistan’s approach to formulating food security strategy by 2030.

For details about this event and links to the presentations, click here.

Central Asia
Westminster Development Policy Network Virtual Seminars
We use cookies on this site to improve the usability of this website. By clicking 'OK, I agree' you are giving your consent for us to use cookies ...more info